Upgrading to Outlook 2016 from Outlook 2013 is easy and you’d probably need very little time to adjust yourself to it. In fact, if it wasn’t for the new default “colorful” theme, you’d hardly notice the upgrade to Outlook 2016 at first sight.

This is actually part of the Office 365 strategy where major new features are also introduced during the main lifetime of the current version, as we saw with Office 2013. In the old strategy, these features were held back for the new version. Office 2016 will get the same treatment so future updates can introduce new features as well.

Until then, there are still plenty of new features in Outlook 2016 to use and discover.

Tip!
As Outlook 2016 is so similar to Outlook 2013, when you are upgrading from Outlook 2010 or previous, I’d recommend reading 36 Short questions and tips for Outlook 2013 as well.

As mentioned, during the main lifespan of Outlook 2013, various new features and changes have been introduced as well. Most of them might not have been directly noticeable to everyone as they were either small, very specific to a certain working scenario or had to do with how Office works “underneath”.

Nevertheless, this is quite a change with how it worked for previous versions of Office as they only got (bar a handful small exceptions) security updates and bug-fixes. Any real changes had to wait for the next version release.

Below are a few examples of some of the major improvements that were later added to Outlook 2013 which previously would be seen as “Outlook 2016 development time”.

MAPI over HTTP is the Exchange connectivity protocol that got introduced in Exchange 2013 SP1 and Outlook 2013 SP1.

From an end-user perspective, this protocol offers faster reconnections to the Exchange server when for instance resuming from hibernation or switching between a wired and wireless connection. It also offers support for native multi-factor authentication for Exchange accounts.

Outlook 2016 also still offers support for the the RPC over HTTP Exchange connectivity support for backwards compatibility with Exchange 2010.

The major user interface redesign of Outlook 2013 originally had quite a large message header. This wasn’t optimal for various screen sizes and tablets with small screens and a high DPI setting that were later introduced.

For more information see: Minimizing the message header in Outlook 2013

The Minimal Message Header layout was later added to Outlook 2013.

Granted, this improvement could also be seen as a bug-fix as it reintroduced functionality that was already available in Outlook 2010.

Originally, the redesigned (or actually; rewritten) To-Do Bar only showed the appointments for the current day, even when there was space for showing more appointments.

In a later update, this limitation got adjusted and showed appointments for up to 7 upcoming days if space permits it. In addition, they added the feature that it will show the appointments from the selected day onwards. Outlook 2010 always showed it from the current day. It may not have been the biggest change, but it was very warm welcomed one.

Even though Outlook 2016 looks very much like Outlook 2013, is does include quite a few improvements. However, not all of them are visible changes but mainly technical (like performance improvements and the reduction of using foreground threads to perform certain operations) or are not visible to everyone as they require you to use an Exchange or Office 365 account.

Below is an overview of the major new features that were added to Outlook 2016.

The default theme of Office 2013 got quite a bit of negative feedback since the color scheme basically lacked, well.., color.

The new default theme of Office 2016 is called “Colorful” and the Ribbon and other accent colors for each Office application match their “icon color”.

The new Colorful theme for Outlook with the School Supplies background. (click on image to enlarge)

The White theme is also still there and the Dark Gray theme has become a bit darker in some areas to more closely match the Dark/Black themes that are common with design software suites like Photoshop and AutoCAD.

Other small UI changes to the Ribbon are:

A new interface feature that is probably welcomed by most tablet users is tablet rotation support and a “responsive” design.

When you switch your tablet into portrait mode, Outlook will show the message at almost full width of your device to optimize the reading experience.

Your original layout settings are remembered when switching between landscape and portrait mode so you don’t have to manually resize all the Panes again.

The new Light Bulb icon in the Ribbon with “Tell me what you want to do…” is a lot more than just a replacement of the the Help Question Mark icon.

When you type something in the the Tell Me field, you’ll actually search through Outlook’s list of commands which are then also useable from list of results.

So, if you for instance don’t know where the option to enable your Automatic Replies is, simply type “Automatic Reply” in the Tell Me field and you can click on the command from the results. 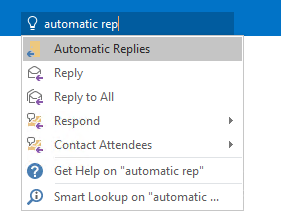 Find a command with the Tell Me feature.

Clicking on the Attach File icon will now open a menu instead of a browser dialog to attach a file.

One of the new options is to “Browse Web Locations”. This allows you to access your online storage like OneDrive and Office 365 SharePoint (OneDrive for Business) without needing to download the file to your computer first. 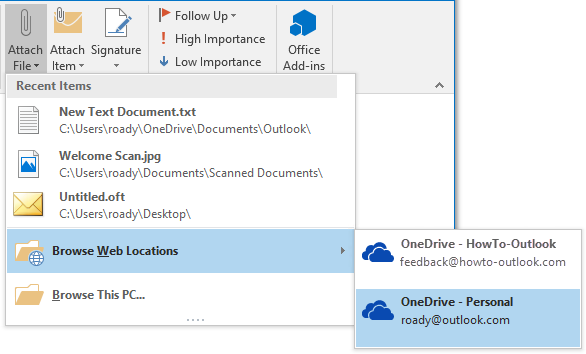 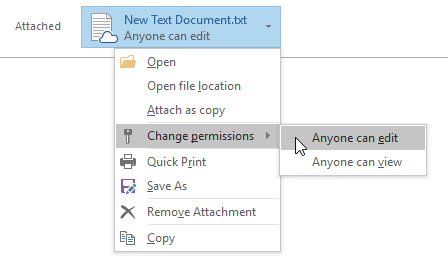 Note:
In addition, the Attach File menu button now also shows a list of your recently used files to quickly add them without needing to browse to it.

When you have an Office 365 for Business subscription, then you might already know about the Office 365 Groups feature. In short, it is basically a shared mailbox you can subscribe to (or even create yourself) and also provides a Calendar and a shared storage location on OneDrive for Business.

Outlook 2016 now includes support to create, join and manage Office 365 Groups so you’ll no longer have to do that via Outlook on the Web (OWA).

For more information about Office 365 Groups in general see: Find help about groups in Office 365.

Note: Office 365 Groups requires an Office 365 for Business account. This feature is (currently) not part of Exchange 2016 on-premises.

Another Office 365 feature that now can be managed directly from within Outlook is the Clutter feature. This feature also applies to Outlook.com mailboxes that have been migrated to Office 365 Exchange Online.

Clutter is a machine based learning feature that automatically puts messages that you are most likely to ignore in the Clutter folder. It does this based on what you’ve done with similar messages in the past.

Outlook 2016 contains new Move to Clutter and Move to Inbox commands in the Move menu on the Ribbon and in the right click menu to help train the Clutter feature. 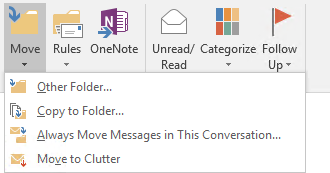 Clutter command in the Move menu.

For more about the Clutter feature, also see:

When you are using an Exchange account in Outlook (either hosted on premises or on Office 365), searches are now being performed against the Search Index of Exchange instead of the local Windows Search Index.

You can now also directly start searching your mailbox directly after configuring your mailbox without needing to wait for the mailbox to be cached and indexed. Additionally, when you only cache a portion of your mailbox (see the Sync Slider section below), you’ll directly query your entire mailbox or folder instead of just the cached part and requiring you to press the “More” link at the bottom to repeat the search query against the server.

When you are offline, your search will still be performed against the Windows Search Index on your computer.

When you only want to cache a portion of your Exchange, IMAP or Outlook.com account, you now also have the option to only cache 3 days, 1 week or 2 weeks worth of email.

This can be particularly useful when you are using a device with a very limited amount of storage and/or when you receive a lot of emails.

The original options of 1 month, 3 months, 6 months, 12 months, 24 months and All are also still available.

Additional Sync Slider settings allow you to further limit what is being cached.

The ability to install Social Connector Providers and connect Outlook to Social Networks like Facebook, LinkedIn and Xing has been removed. This is little surprising as LinkedIn had dropped support for it a long time ago and Facebook followed soon after.

The People Pane itself hasn’t been removed from Outlook 2016 so you can still use it to see the latest mail, attachments and meetings you had with that contact.

Ever since Exchange 2007 got released, a properly configured Autodiscover service was required to have a supported Exchange configuration. You could often still get away with it by configuring the Exchange account manually in Outlook, especially when it came to the so called “Exchange Proxy Settings”, but you would then miss out on features like Rules, Automatic Replies and Free/Busy Information.

Exchange has evolved over the years too and to support new features, improving the connection speed and high availability scenarios, it now completely depends on Autodiscover for Outlook connectivity support; The generated connectivity strings that are required today are no longer readable and are different for each mailbox.

The dialogs to manually configure an Exchange account were only still included for backwards compatibility with Exchange 2003 and since Outlook 2016 only supports Exchange 2010 or later, the dialogs served no real purpose anymore anyway.

To configure an Exchange account, all you need to provide is your name, email address and password and Outlook’s Auto Account Setup and Exchange’s Autodiscover service will configure the rest.

This removal doesn’t come as a surprise as all Outlook versions only support up to 2 previous versions of Exchange.

Technically speaking, this isn’t a removal for Outlook 2016 as Business Contact Manager (BCM) is a separate add-in for Outlook. However, since its release has been in tandem with the release of Outlook since Outlook 2003, it is worth mentioning that BCM will not be updated anymore for compatibility with Outlook 2016.

Business Contact Manager is based on the same technology as Microsoft Dynamics CRM and is also available as a hosted solution for small and midsize businesses to which most BCM data can be migrated to.