Planning to upgrade to Outlook 2016? This guide contains a lot of preparation and other information to get yourself ready to ensure a smooth transition

Aside from the preparation steps, this guide informs you about what to expect when you start Outlook 2016 for the first time after you upgraded and how to troubleshoot several issues you may encounter during or after the installation.

Tip!
Have you already successfully upgraded to Outlook 2016?
Then you might enjoy the guides New and Changed in Outlook 2016 and Where do I find…? instead.

In order to install Outlook 2016, you’ll need at least the following version of Windows and Service Pack level:

If you want to use Outlook 2016 on a server version of Windows you can use:

Right click on “Computer” in the Start Menu or Explorer and choose Properties to see which Windows Service Pack you have installed. Another way to see it is via: Control Panel-> System and Security-> System

Trying to install Office 2016 on Windows XP or Windows Vista will result in the error:
The specified program requires a newer version of Windows.

If you are making use of an Exchange account, the Exchange server has to be one of the following versions. Earlier versions of Exchange are not supported.

Tip!
To find out which version of Exchange you are connecting to now see this Quick Tip.

Choosing between 32-bit and 64-bit

When it comes to Outlook, there is no direct benefit of having the 64-bit edition instead of the 32-bit edition.

For more information see: Should I install the 32-bit or 64-bit version of Office/Outlook?

Note:
Even when you are using the 32-bit edition of Office 2016, some add-ins might not be compatible yet with Office 2016. You can check with the vendor of the add-in to verify its compatibility. If you run into issues with Outlook after the upgrade, start with disabling your add-ins.

If you do not plan to use any of the Office applications of a previous version of Office, it is recommended to completely uninstall the Office suite before starting the installation process of Office 2016 unless you are using Office 365. This is because an upgrade process will still leave several (support) components installed.

Note:
When uninstalling Office, you will not lose any settings or Outlook data and settings will still be automatically upgraded. It of course never hurts to make a backup of your Outlook data first.

If you are having difficulties removing your current version of Office via Control Panel, you can use the FixIt from the Microsoft KB article below which matches with the version that you wish to uninstall:

When you are currently using an Office 365 installation of Office 2013, then upgrading to Office 2016 is going to be really easy as it will be offered as a regular update.

If the update isn’t being offered to you yet, go to:
File-> Office Account-> Update Options-> Update Now

If you still aren’t being updated to Office 2016 then, you can download the Office 2016 installer from your Office 365 Portal page:

There is no need to uninstall your current Office 365 installation first.

When you start Setup from an installation medium that has both the 32-bit and the 64-bit edition on it, you’ll be installing the 32-bit version of Office by default.

To install the 64-bit edition, you must close the current Setup window and browse to the installation source (for instance on the CD or DVD-drive). Here you’ll find a folder called office. Open it and run the setup64.exe file located in this folder. The setup process is further the same as for the 32-bit version of Office.

Starting Outlook for the first time after the upgrade

When you start Outlook for the first time after the upgrade, the startup could take some time. This is because your previous settings are being migrated. 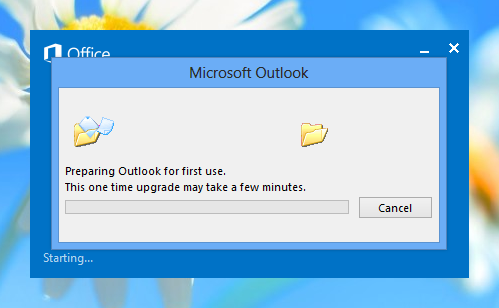 Mail profiles are upgraded on startup and some accounts will be re-cached.

If you are upgrading from a version earlier than Outlook 2007 Service Pack 2, then several extensive file structure changes to the pst-file are being made which could take a lot of time (especially with a large pst-file). Upgrading from a later version usually goes a lot quicker.

When the processing is being performed in the background, Outlook notifies you with a Notification Bar at the top in your main Outlook Window. If you close this Notification Bar, then you can also press on the File button to monitor the progress in Backstage

The “Upgrade in progress” notification is shown when a conversion is still taking place in the background. (click on image for full notification message)

Note:
While upgrading from a previous version of Outlook will automatically upgrade your mail profile, it still is recommended to recreate you mail profile when upgrading from Outlook 2010 or previous due to deep level changes to multi-account, Outlook.com and IMAP support and other configurations.

Depending on your current configuration of Outlook and version, there are a couple of additional things to be aware of.

If you are an Office 365 subscriber and not yet ready to upgrade, you can postpone the automatic upgrade so you can prepare for it first.

When you are currently using Outlook 2013 as part of an Office 365 subscription, you can postpose the automatic upgrade to Office 2016 for up to a year after its release by setting a Registry value.

As long as you have this Registry value set, you can postpone the automatic upgrade until September 2016. During this time, you’ll of course still get updates for Office 2013 as part of your Office 365 subscription.

If you were using Outlook Business Contact Manager (BCM) with Outlook, then you’ll no longer be able to use it with Office 2016. BCM will not be updated for Office 2016 compatibility.

If you are currently relying of BCM, you can uninstall Office 2016 and reinstall your previous version of Office and it will continue to work again. When you are using an Office 365 installation, make sure you set the Postpone key as instructed above so you’ll not be automatically upgrade to Office 2016.

The replacement for BCM is Outlook Customer Manager (OCM). It is available via an Office 365 Business Premium subscription. There are also smartphone and tablet apps available to access your data on the go as well.

An alternative to BCM could be Microsoft Dynamics CRM. As BCM was originally also based on this product, you may find it to work quite similar and be able to directly migrate much of your data.

Microsoft Dynamics CRM is being offered in many variations including one specific for Small and Midsize Businesses.

To use iCloud with Outlook 2016, you must update iCloud to at least version 5.1. Once you’ve done that, you can use the iCloud Control Panel to configure it to sync Outlook 2016 with your iCloud Mail, Contacts and Calendar.

Outlook.com/Hotmail accounts no longer use the Outlook Hotmail Connector but connect as an actual Exchange account.

If you still have the Outlook Hotmail Connector installed on your computer, you can uninstall it.

Are you using Microsoft’s Personal Folders Backup Add-in? You’ll find it no longer working with Outlook 2016. In fact, Office 2010 wasn’t officially supported by the add-in either.

You can choose to backup your pst-files manually or include them in other backup schedules which you have configured already.

Outlook 2010 and previous: Re-caching and recreation of mailboxes

Due to various mail account and data file changes, your mailbox will be re-cached from the mail server in the following situations:

Outlook 2002/XP, Outlook 2003 and Outlook 2007 make use of an nk2-file to store recently used addresses in which are used as an AutoSuggest/AutoComplete feature when addressing a new message. Outlook 2016 no longer uses an nk2-file for caching but stores these addresses in the Outlook mailbox itself.

When you upgrade to Outlook 2016, the nk2-file is automatically imported upon starting Outlook 2016 for the first time. When you create a new Outlook mail profile or when using Outlook on a new computer, you can import an existing nk2-file in the following way;

Unlike with previous versions of Office, it is not supported to have multiple versions of the application installed. This means that you can’t have both Word 2013 and Word 2016 installed on your computer.

Additionally see: Error: Stop, you should wait to install Office 2016. We’ll have to remove the following if you continue.

Volume License based msi-installations of Outlook 2016 can still co-exist with previous versions of other Office applications on the same computer. There are a couple of side-notes though;

Just with any previous versions of Outlook, the Mail Merge feature only works when Word and Outlook are the same version.

Outlook 2016 is available as a standalone application as well without needing to install or buy the other Office 2016 applications. However, not all features might be available to you. Similar to Outlook 2007, Outlook 2010 and Outlook 2013, the following features require you to install Word 2016 as well;

Similar to Office 2007, Office 2010 and Office 2013, the Themes feature requires Outlook to be installed as part of a suite. A combination of Office 2016 Home & Student with a standalone installation of Outlook 2016 will not enable this feature.

You can find the Theme feature via;
File-> Options-> section Mail-> button Stationery and Fonts…

This website uses cookies to improve your experience. By continuing to use this site, we'll assume you're ok with this, but you can opt-out if you wish.AcceptManage & More info