Planning to upgrade to Outlook 2010? This guide contains a lot of preparation and other information to get yourself ready before you double click on that setup.exe file.

Aside from the preparation steps, this guide informs you about what to expect when you start Outlook 2010 for the first time after you upgraded and how to troubleshoot several issues you may encounter during or after the installation.

Furthermore, for those of you who need some transition time, you’ll find a Ribbon-Customization-file in this guide to make the Outlook interface look similar to the one found in Outlook 2007.

In order to install Outlook 2010, you’ll need at least the following version of Windows and Service Pack level;

If you want to use Outlook 2010 on a server version of Windows you can use; 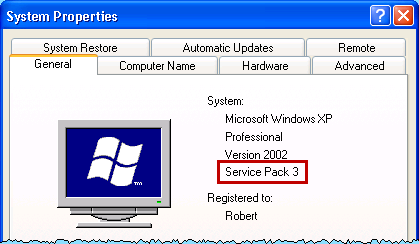 Right click on “(My) Computer” in the Start Menu and choose Properties to see which Windows Service Pack you have installed.

If you are making use of an Exchange account, the Exchange server has to be one of the following versions. Earlier versions of Exchange are not supported.

Tip!
To find out which version of Exchange you are connecting to now see this Quick Tip.

Choosing between 32-bit and 64-bit

Benefits of using the 64-bit edition of Outlook 2010

Using the 64-bit version of Outlook does not have any direct benefits. The functionality within Outlook is the same and there is also no (noticeable) performance increase by using the 64-bit edition.

If you do not use these 64-bit specific features, Microsoft recommends that you use the 32-bit version instead. Unless you specifically choose otherwise, the installer will automatically install the 32-bit version of Outlook even when your system supports the 64-bit edition (further details are discussed later in this article).

Downsides of using the 64-bit edition of Outlook 2010

If you choose for the 64-bit version, you’ll have to be aware of the following downsides;

Note:
While every add-in requires an update for compatibility with the 64-bit version of Outlook 2010, many 32-bit add-ins might require an update as well. You can check with the vendor of the add-in to verify its compatibility. If you run into issues with Outlook after the upgrade, start with disabling your add-ins.

If you do not plan to use any of the Office applications of a previous version of Office, it is recommended to completely uninstall the Office suite before starting the installation process of Office 2010. This is because an upgrade process will still leave several (support) components installed.

Note:
When uninstalling Office, you will not lose any settings or Outlook data and settings will still be automatically upgraded. It of course never hurts to make a backup of your Outlook data first.

Installing Office 2010 while a BETA version is still installed is not possible.

If it does, and you want to start installing it, you must close the current Setup window and browse to the installation source (for instance on the CD or DVD-drive). Here you’ll find a folder called x64. Open it and run the setup.exe file located in this folder. The setup process is further the same as for the 32-bit version of Outlook. 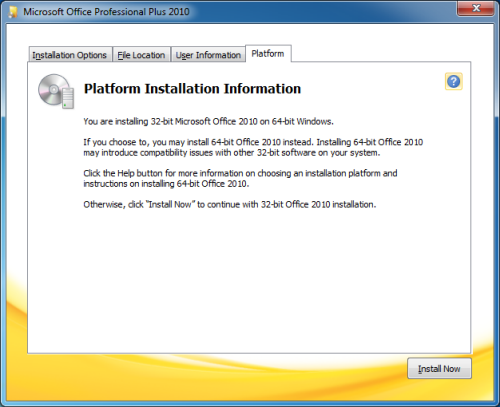 Installation Information about the availability of the 64-bit version of Office 2010.
(click on image to enlarge)

Starting Outlook for the first time after the upgrade

When you start Outlook for the first time after the upgrade, the startup could take some time. This is because your previous settings are being migrated. If you are upgrading from a version earlier than Outlook 2007 Service Pack 2, then several file structure changes to the pst-file are being made which could take a lot of time (especially with a large pst-file).

When the processing is done in the background, Outlook notifies you with a Notification Bar are the top in your main Outlook Window. If you close this Notification Bar, then you can also press on the File button to monitor the progress in Backstage 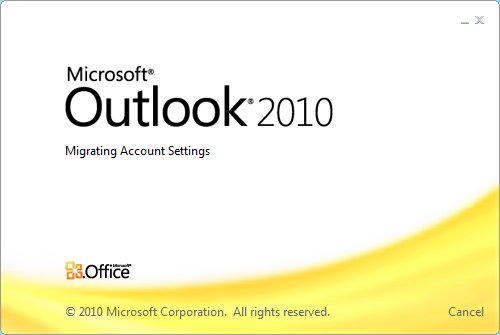 Mail profiles are upgraded on startup

The “Upgrade in progress” notification is shown when a conversion is still taking place in the background. (click on image for full notification message)

Note:
While upgrading from a previous version of Outlook will automatically upgrade your mail profile, it is recommended to recreate you mail profile as there are quite a number of changes in multi-account support and configuration.

Outlook 2002/XP, Outlook 2003 and Outlook 2007 make use of an nk2-file to store recently used addresses in which are used as an AutoSuggest/AutoComplete feature when addressing a new message. Outlook 2010 no longer uses an nk2-file for caching but stores these addresses in the Suggested Contacts folder in the Outlook mailbox itself.

When you upgrade to Outlook 2010, the nk2-file is automatically imported upon starting Outlook 2010 for the first time. When you create a new Outlook mail profile or when using Outlook on a new computer, you can import an existing nk2-file in the following way;

Tip!
ABF Outlook Backup (discount code: ABF-HT2GL ) is fully compatible with Outlook 2010 and supports migrations from previous versions of Outlook and Windows to a new version, even on a new computer.

Upgrading from Outlook 2002/XP or previous

When upgrading from Outlook 2002/XP or previous to Outlook 2010, then aside from starting with a new mail profile, it is also recommended to start with a new pst-file. This is because since Outlook 2003, the pst-file format has changed from an ANSI format to a Unicode format. The benefit of this new file format is international character support and the 2GB file size limit no longer exists.

Upgrading your pst-file from ANSI to Unicode format goes easiest when you also have started with a new mail profile. In that case you can reconnect to your original ANSI pst-file via;
File-> Open-> Open Outlook Data File…

If you did not start with a new mail profile, then you can create a new pst-file and set it as the default;

Moving all your data

After you’ve created a new Unicode pst-file, you can copy over all your messages and folders from the old pst-file to the empty new one.

To move your Calendar items all at once, you can switch your Calendar view to a table layout via;
tab View-> button Change View-> List

You can now move your appointments and meetings just like you move your email messages.

When done moving/copying, you should disconnect the old ANSI formatted pst-file. Before you do this, make sure none of your email accounts are still set to deliver to this pst-file. You can do this via; 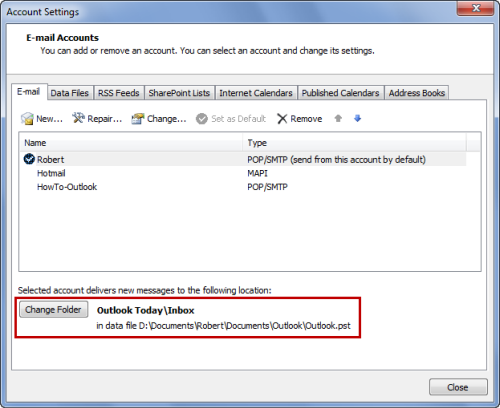 Verify that the delivery location of an account is not still pointing to an old pst-file.
(click on image to enlarge)

Outlook 2010 no longer uses Toolbars and Menus in the main interface but now also uses the Ribbon. If you are heaving issues with finding your favorite options in the new interface, you can use the guide: Where do I find…?.

Outlook does not ship with a classis interface built-in to mimic the interface of Outlook 2007 and previous. For people having difficulties to quickly adapt to the new interface and to support migration projects, I’ve created a customized Ribbon which looks like the Office 2007 interface.

You can add the Classic tab in the following way;

Adding a Classic interface to Outlook 2010 with Menus and Toolbars.
(click on image for a full view of the Classic tab)

Note:
Due to Ribbon limitations and feature changes, the Classic Ribbon tab is not an exact replica but a close approximation of the menu and toolbars in Outlook 2007.

While you cannot have multiple version of Outlook installed on the same machine, Outlook 2010 can co-exist with previous versions of other Office applications on the same computer. There are a couple of side-notes though;

Just with any previous versions of Outlook, the Mail Merge feature only works when Word and Outlook are the same version.

Outlook 2010 can be installed without needing to upgrade all the other Office applications. However, not all features might be available to you. Similar to Outlook 2007, the following features require you to install Word 2010 as well;

Similar to Office 2007, the Themes feature requires Outlook to be installed as part of a suite. A combination of Office 2010 Home & Student with a standalone installation of Outlook 2010 will not enable this feature.

You can find the Theme feature via;
File-> Options-> section Mail-> button Stationery and Fonts…