OutlookTempCleaner is a support tool for Microsoft Office Outlook. It gives you easy access to the Temp folder that Outlook uses to open attachments. It further allows you to automate maintenance to it via Windows’s Scheduled Tasks. 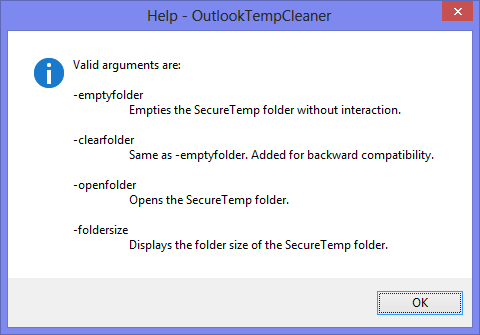 Examples for use of the command line functions;

-emptyfolder
If you want to automatically empty the folder via a logon or logoff script or task, you can use the -emptyfolder switch. This is particularly handy for shared domain computers. You can basically set it and forget it and not worry about leaving sensitive files, your hard disk filling up or suddenly running into errors when you often deal with attachments with the same name.

-openfolder
As the OutlookSecureTemp folder location is different for each user there is no way to deploy a single shortcut.

With OutlookTempCleaner you can create a shortcut with the -openfolder startup switch to directly open the OutlookSecureTemp folder. The result is that you can deploy a standardized shortcut and allow users easy access to the folder.

-foldersize
With the -foldersize startup switch you can create a scheduled task (for instance; run once per week) to inform you of the current size of the folder. This way you can easily keep track of its size and empty it when you think it is getting too big.

OutlookTempCleaner can be executed directly from the Run command as well by typing; outlooktempcleaner
There is no need to supply the installation path to the file.

OutlookTempCleaner is a free tool. Commercial companies and users of the command line options available in OutlookTempCleaner are highly encouraged to make a donation to continue to keep it free and support future development.

The latest version can be downloaded by clicking the download button below. For a version history click here.

In order to function properly the product requires the following;