A recent change in the PayPal notification messages can cause Outlook to hang for a couple of minutes. The issue is caused by an invalid picture reference in the message and the way Outlook deals with time-outs.

Note that the location is pointing to a network share.

Obviously this fails, but Outlook is quite persistent in still trying to reach this network share and it takes up to a minute for it to time-out and stop trying. As this is being done in a foreground thread, it means you cannot use Outlook during this time and will display a “Not Responding” message in the title bar when you try it anyway.

This is a multilayered bug in Outlook itself which is currently being looked into;
Outlook shouldn’t do this in a foreground thread and since it is content from an external domain, it shouldn’t automatically try to download the content when you have the external content blocking enabled (on by default).

Update:
After almost 3 years, a permanent fix has finally been released in Hotfix KB2881058 for Outlook 2010 and Hotfix KB2883076 for Outlook 2013 which will prevent Outlook from showing download prompts and hanging when the link for a linked image doesn’t work (for any image, not just for PayPal messages).

The workaround listed below is no longer needed for these versions of Outlook.

PayPal is aware of this issue and the template should be corrected soon (if it hasn’t been already). As long as it hasn’t been fixed, you can disable the Reading Pane to prevent accidental selection of the message and cause another time-out of a minute.

As the issue is within the message itself, the issue won’t go away for PayPal messages which you have already received. Throwing away the broken messages would be one solution but if you need to keep the message, you can do the following;

Remove the space behind the reference number to select the image, which
will show as a dot. Pressing Backspace again will remove the broken image.

Fixing a lot of broken messages at once

If you have a lot of broken PayPal message which you all need to keep, then you can also modify your HOSTS file to fix the issue.

Now all the bad requests for the tracking image will be directly rerouted back to your computer which rejects it and causing a time-out which is hardly noticeable. 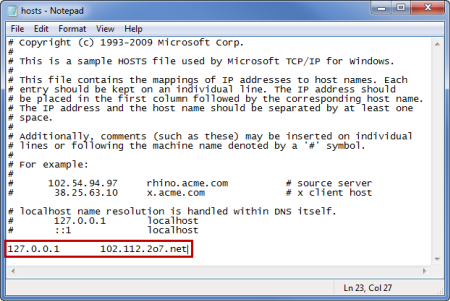 Corporate solution for all computer clients at once

If you are in a corporate network, your system administrators can fix this for everyone at once by adding a Forward Lookup Zone (Primary Zone) for the 102.112.2o7.net domain. Then add an A host record without a name and have it resolve to 127.0.0.1.

Clients who still have an issue can run ipconfig /flushdns from an elevated command prompt or reboot the computer to flush the DNS cache as well.