There are several guides containing PowerShell scripts on HowTo-Outlook.com. PowerShell is a powerful scripting language which can be used by many applications including Outlook and Exchange. For end-user usage, it can be seen as the successor of vbs and batch scripts.

PowerShell scripts are easy to use but there are a couple of things to be aware of, especially when it is the first time you use such scripts.

This guide contains frequently asked questions regarding the use of PowerShell scripts and some additional tips and tricks to get you started.

The default action when double clicking on on a ps1-file is to open it in Notepad or another text or script/code editor which you may have installed such as Visual Studio Code.

This is mainly done for security reasons and to prevent you from accidentally executing scripts.

Partly it is also a convenience feature to easily verify or edit the code as many scripts are not manually executed but automated via Scheduled Tasks, Logon Scripts or have been implemented as callable functions (like Get and Set commands).

There still are other methods available which allow you to easily run a PowerShell script which is discussed later below.

How do I open PowerShell?

A quick way to open PowerShell is to right click on the Start Menu icon and choose; Windows PowerShell.

If the option isn’t listed, just type “PowerShell” directly after opening the Start Menu or within the Search box.

Yet another alternative is to scroll down within the Start Menu to the Windows PowerShell folder and start it from there.

However, in some cases it is not needed to first manually start PowerShell to execute a script (see the next entry). 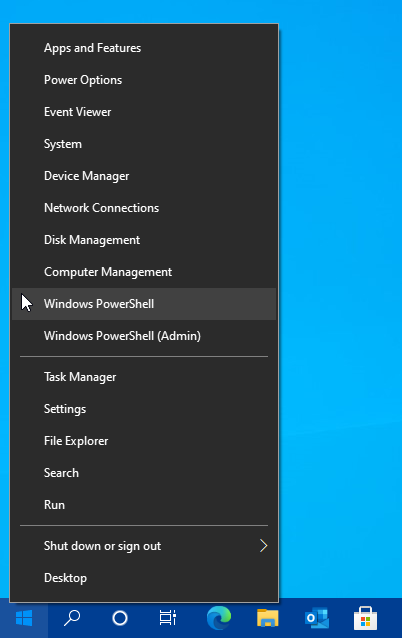 Right click on the Start Menu to quickly open PowerShell.

How can I easily execute a PowerShell script?

The easiest way to execute a PowerShell, script which allows for direct execution, is to right click on them and choose; Run with PowerShell. 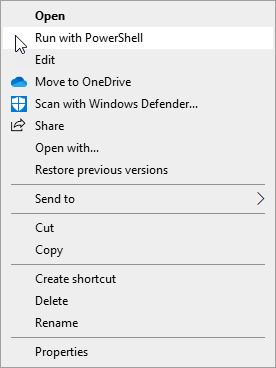 If you only have the code, for instance from a webpage, then you can often simply copy/paste the code directly into a PowerShell window as well.

If the script needs to be loaded first or requires additional parameters, you can also use one of the following methods; 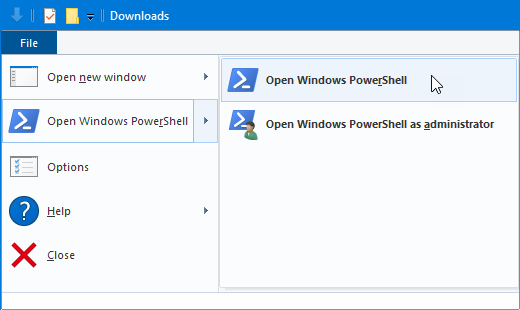 When you try to execute a PowerShell script you’ve downloaded from the Internet, you may get errors similar to this;

In most cases, this can be solved by adjusting 2 things; 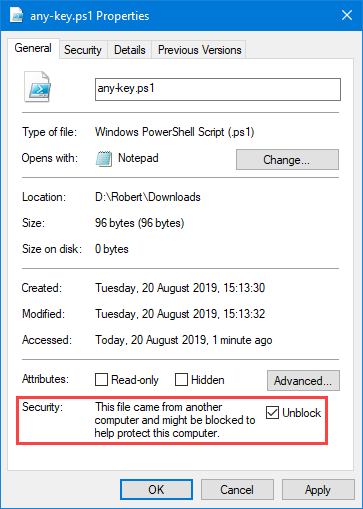 After downloading a script, don’t forget to unblock it.

Dot-Source scripts within your PowerShell Profile

If the script contains function which you need on a regular basis, then you can “dot-source” the script by adding a reference to it in your PowerShell Profile.

By dot-sourcing the script, the script automatically loads (but not executes!) when you start PowerShell. This means that you can directly type the name of the PowerShell cmdlet (function) that is contained within the script.

To dot-source a script within your PowerShell profile open PowerShell and type;
notepad $profile

If Notepad prompts you that the file doesn’t exist and whether you want to create it choose “Yes”. If you get an error “The system cannot find the path specified.”, close Notepad and type the following command instead;
New-Item -Path $profile -ItemType "file" -Force

Within Notepad, type a dot, then a space and then the full path to the script. For example;
. "C:\Scripts\MyScript.ps1"

Save and close Notepad and then restart PowerShell. You can now directly type any function contained within the MyScript.ps1 file. 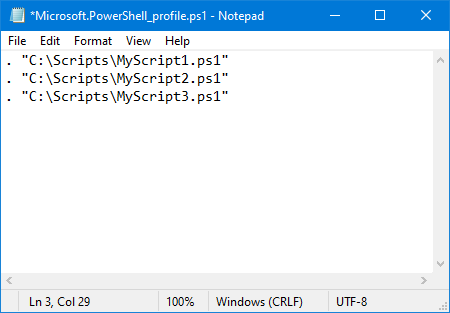 You can dot-source multiple scripts in your PowerShell Profile.

Note:
By default, your PowerShell Profile is stored in a file called Microsoft.PowerShell_profile.ps1.

To find out its exact location use the following PowerShell command;
Get-Item $profile

Creating a Scheduled Task which executes a PowerShell script

To run a PowerShell script automatically via Scheduled Task, you’ll need to configure it to run PowerShell and add the script as an argument. 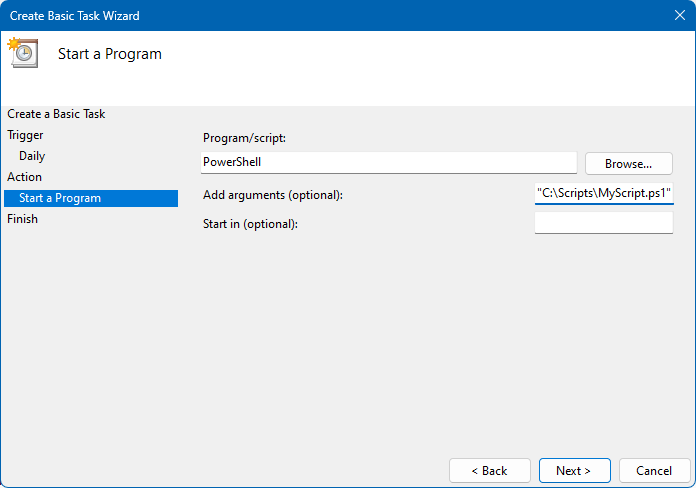 Tip!
You can actually also fill out everything within the Program/script field. Upon clicking Next, Task Scheduler will detect that you have arguments specified and will prompt you whether or not it should correct it.

When you are working with PowerShell scripts for Microsoft 365 (previously known as Office 365), you’ll first need to install the PowerShell modules for each service and connect to that service before you can execute any scripts.

Some of these modules need to be downloaded and installed separately but most can be installed directly via a PowerShell command as well.

Below is an overview of the most common modules;

To see which modules you have installed use;
Get-InstalledModule

To see which modules are available on your computer use;
Get-Module –ListAvailable

Updating the modules can be done via;
Update-Module –Name <modulename> –Scope CurrentUser

Note:
In case you are getting errors about no repository being available, register it in the following way;
Register-PSRepository -Default -InstallationPolicy Trusted -Verbose

This website uses cookies to improve your experience. By continuing to use this site, we'll assume you're ok with this, but you can opt-out if you wish.AcceptManage & More info