Every now and then, the following story reaches us;

Today when I started Outlook, I got the error that my pst-file was missing and Outlook would not start. I checked the location where my pst-file should have been but indeed it wasn’t there. My last backup is from months ago so that is not a lot of help.

What happened and is there any way that I can still recover my Outlook data?

While nothing works better than having your backups in order, all might not be lost yet if you had your pst-file stored on a disk with Previous Versions protection enabled. This however does require you to be using Windows Vista or Windows 7. Windows XP users will require additional tools which is discussed later in this guide as well.

The methods described below also work for pst-files that you have accidentally overwritten or have been damaged beyond the repair capabilities of the Inbox Repair Tool (scanpst.exe).

Note:
If you accidentally permanently deleted a message or folder from Outlook and need to recover it see; Restore Deleted Items from an Outlook PST-file

Even though Previous Versions is not included in Windows Vista Home Basic and Vista Home Premium, the needed service (Volume Shadow Copy Service) is still there and active as it powers System Restore as well. To also be able to retrieve previous versions of files and folders from it with these versions of Windows Vista, you can use a free tool called ShadowExplorer.

How to recover via Previous Versions

The recovery process via Previous Versions is very straight forward;

If the restore folder doesn’t contain the pst-file file, close it and open a less recent version until you’ve found it.

If the folder containing the pst-file itself no longer exists either, right click on its parent folder (one level higher) and start the “Restore previous versions” process from there to see if it still holds a shadow copy of that folder. 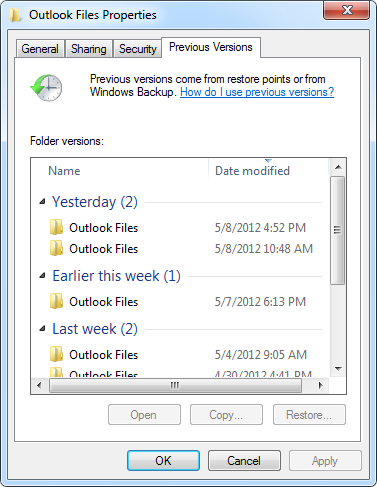 Previous Versions of the “Outlook Files” folder in (My) Documents.
(which is the default folder for pst-files in Outlook 2010)

As mentioned, Previous Versions is only enabled for the system drive by default (the drive that you installed Windows on). You can enable it for additional drives in the following way; 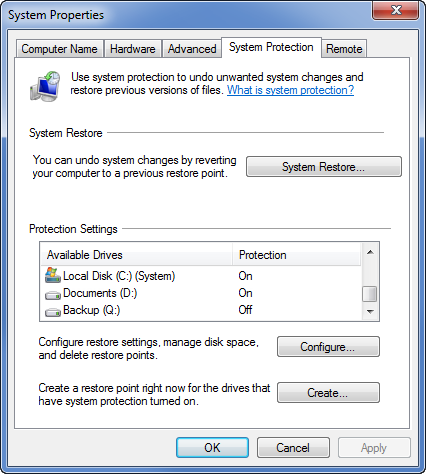 Select a drive and then press Configure to enable Previous Versions.

Recovery for Windows XP or when Previous Versions is disabled

In general, disk recovery tools don’t have a positive outcome for pst-files. This is usually due to the size of the pst-file (higher level of fragmentation) and due to the fact that parts of the space where your pst-file was written on has already been overwritten by new data.

In those cases where a disk recovery tool was able to restore (parts of) your pst-file, you’ll probably end up with a raw dat-file or a pst-file which is too corrupted to be opened by Outlook and which cannot be fixed by the Inbox Repair Tool (scanpst.exe).

To find out if there is anything recoverable still left in the file, you could try a commercial pst-recovery tool. You can use their trial version first to make sure it is up to the job to recover your pst-file as the results can differ per application.

A tool which can both scan your hard disk for any deleted pst-files and attempt to fix it at the same time is Advanced Outlook Data Recovery from DataNumen (discount code: DNC-PUXB-HT ). This tool can also assist you in recovering Outlook data even after you have formatted and repartitioned your drive.

What exactly happened and caused the pst-file to be gone overnight is hard to tell from here. From experience, the most common causes are: