A new version of the Outlook Hotmail Connector has been released.
Checking the about box will reveal the version number 14.0.6106.5001.

The main new feature is that it now supports HTTPS, which means that all communication between Outlook and Windows Live services (Mail, Calendar and Contacts) is now being encrypted and thus fully secure. There is no need to change any settings to make it work; just install the latest version of the Outlook Hotmail Connector and you’re set.

Note:
You could see some Send/Receive errors and Outlook reporting “Limited Connectivity” for some time after installing this Outlook Hotmail Connector version. This is due to the fact that your old non-HTTPS Cookies need to expire first. This will fix itself over time. For details see the Send/Receive errors section.

Several other fixes are included in this release as well, including a fix for characters which are valid in Outlook but invalid in Windows Live Hotmail. Also, flagged items with reminders will no longer prompt even after it was dismissed. For more see; Full list of fixes.

Directly after updating, there seem to be some network issues with this update. In that case you can get the send/receive errors listed below and Outlook could show that it is connected with Limited Connectivity. While annoying, it doesn’t seem to affect functionality (other than still connecting via HTTP).

These errors are due to the fact that your old non-HTTPS Cookies need to expire first. This will fix itself over time and then you’ll automatically connect via the secure HTTPS protocol and no longer via HTTP.

Note: The old Cookies are also stored server-side, so deleting your local Cookies from the Internet Explorer History will not solve it sooner. 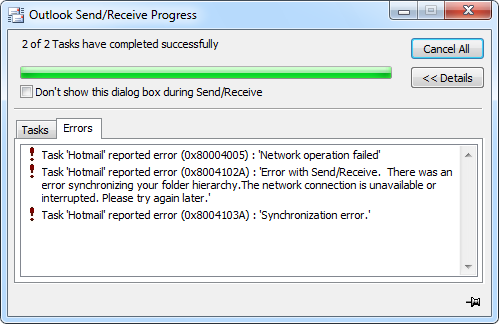 These Send/Receive errors will go away automatically after some time.

As published on the Outlook Team Blog;