Ever used the Taskbar option “Group similar taskbar buttons”? It is a new feature introduced with Windows XP and it is on by default. For me it is one of the first options I disable when I configure a Windows XP client. In most cases it means extra clicking and therefore didn’t need the option.

Recently I actually enabled the option on purpose as I finally needed it to work more efficiently. During my study for SQL I had the test exam open, Books Online, several Word documents and lots and lots of Internet Explorer pages. The result; very tiny taskbar buttons and I could scroll my Taskbar for about 4 or 5 lines! Not a pretty sight so I enabled the option and the taskbar was one line again and I could actually read the buttons again. 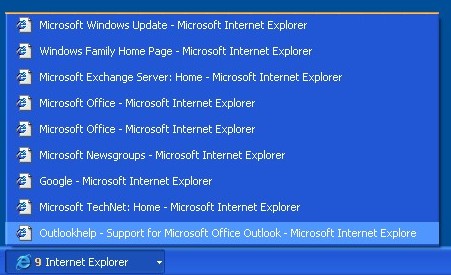 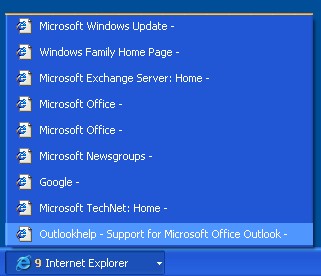 Fortunately removing it is pretty easy;

Now when you close all instances of Internet Explorer and start a new one “Microsoft Internet Explorer” is gone in the Title bar and all that is left is the title of the webpage with dash behind it (which can’t be removed as far as I know).